HomePublications Monitoring Report: Recruitment and Promotion In State Authorities In 2014 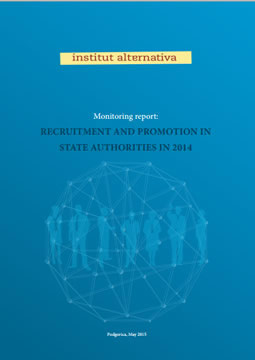 Two years into its implementation, the contribution of the Law on Civil Servants and State Employees towards establishing a merit-based employment system in state administration has been limited due to inconsistent application of new rules and poor competition for vacancies.

The fact that very few candidates successfully pass the mandatory testing procedures for any given job position, on the one hand, and the broad interpretation of the head of state authority’s discretionary right to select from among the top five candidates, on the other hand, hardly contribute to the efforts at establishing a recruitment system that would be based on objective criteria.

Promotion of civil servants and state employees is virtually non-existent. According to available data, during the reporting period not a single decision on promotion has been passed. The legal provision that stipulates excellent results are a basis for promotion but only into a higher pay-grade is clearly not the right solution for motivating and keeping the best skilled employees.

In 2014, the number of complaints against heads of authorities’ decisions has more than doubled compared to 2013. A big portion of the complaints is against the decisions on selection of candidates, decisions on reassignment, and performance appraisal. Out of the 322 complaints and decisions that Institute Alternative has analysed, as many as 222 have been upheld, meaning more than two thirds. Most complaints were adopted due to formal mistakes by state authorities.

Transparency of the skills testing is at high level. The Human Resources Management Authority (HRMA) regularly publishes ranking lists on its website. However, it is more difficult to obtain data from state authorities, due to the high costs of accessing the information (over 500 EUR for obtaining the data required for this year’s monitoring). Of the 18 state authorities that we contacted requesting more detailed information on recruitment and promotion, only the Ministry of Defence refused to supply us with names of civil servants who were appointed to positions at this institution in the second half of 2014.